Hugely influential, and inspirational – Maxine Powell enabled her protégés to make the transition from A lister (with raw talent), to brilliant star (with that magical something extra). The extra was a combination of manners, grace, self-confidence and ease in social situations and performances which transformed a person’s social mobility.  This is the type of nurturing that we should be developing more in school, so that our youngsters can make the most of their opportunities in life. A solid academic background is not sufficient to allow a student with talent or genius to make the leap outwith their background or class, it is still the case that “manners maketh the man” or woman.

The original obituary written by The Telgraph on 30th December 2013 is here:
http://www.telegraph.co.uk/news/obituaries/10543142/Maxine-Powell-obituary.html 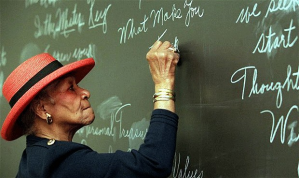 Maxine Powell, who has died aged 98, was an etiquette and deportment guru   recruited by Berry Gordy, the founder of Motown Records, to help package his   black stars for the white pop music market.

Before moving to Motown, Maxine ran her own “Finishing and Modelling School”   in Detroit where, in the 1950s, she broke new ground by persuading Detroit’s   major automobile companies to use black models at their trade shows and by   placing her girls with advertisers that bought space in local newspapers.   “In the 1950s, there was no market for black models and blacks didn’t make   the papers unless they committed a crime or did something naughty,” she   recalled.

Berry Gordy’s sisters — Loucye, Esther and Gwen — attended Maxine Powell’s   school and Gwen became one of her top models. She brought Maxine Powell to   Motown in 1964 and introduced her to her brother, a fledgling songwriter who   had founded his small record label five years earlier.

Berry Gordy had become convinced that something had to be done to improve the   image of his singers, many of them Detroit street kids with attitude who   lacked discipline and finesse. In 1962, the Motown roster’s first “Motor   Town” touring revue had been characterised by the copious consumption of   whisky and marijuana offstage, and nervousness and lack of professionalism   onstage. What was required, he felt, was an in-house “grooming school”.

It was decided that Motown’s chief talent scout, Harvey Fuqua, would run the   operation, with Maxine Powell coming aboard as a consultant  to make   Motown’s performers fit “for kings and queens”. It was her idea to call the   new division “Artistic Development”.

Her department soon became known as “Motown University”, and recording artists   were required to attend Maxine Powell’s classes for two hours every day.   “They were all from humble backgrounds, from the streets and the projects,”   she recalled. “Some of them were crude and rude and some of them were   speaking street language. All they wanted was a hit record. I’m the woman   who gave them class.”

Maxine Powell worked with all of Motown’s stars, including Diana Ross and the   Supremes, Martha Reeves and The Vandellas, Smokey Robinson and The Miracles,   The Temptations and Marvin Gaye. She taught them basic table manners and how   to stand, walk, speak and shake hands, emphasising the importance of body   language, public speaking, appropriate clothing and etiquette. “Everybody   walks,” she explained, “but I teach how to glide.”

Among other things she taught them how not to alienate their fans by losing   their cool or giving negative answers in interviews; for promotional   photographs, stars were instructed to pose with one foot forward. Female   singers were exhorted to “remember your gloves, walk with class — and never,   ever protrude the buttocks”, even when bending down to pick something up,   because it was like telling audiences to “kiss my ass”. If any of her   protégés objected to such injunctions, she would say: “Do not confuse me   with your parents — they’re stuck with you. I’m not.”

One of her more challenging pupils was Diana Ross who, Maxine Powell recalled,   “came in a bit snooty. And I worked with her to show that there was a vast   difference between being snooty, and being gracious and classy, because   snooty people are insecure… I taught her not to bend in all directions and   act as if she was going to swallow the microphone while making ugly faces…   I also wanted her to get rid of her eye-popping routine, and she did.”

Though the singer was never cured of her overweening ego, Diana Ross did call   up Maxine Powell on to a Broadway stage many years later (by which time Ross   had become an international superstar), and introduced her to the audience   as the woman who had taught her everything she knew.

Maxine Powell’s training helped to establish the ladylike glamour of Motown’s   female singers and girl groups and the refinement and polish of the men that   set the Detroit label apart from its scruffier competition and made it so   successful. As one commentator observed: “All of Miss Powell’s ladies   remembered their training. Their wigs were always impeccable. They exited   cars like Princess Grace. The men — Smokey Robinson, Levi Stubbs, Marvin   Gaye — exuded a kind of suave, reined-in sexuality that appealed to black   audiences and didn’t frighten white ones.”

She was born Maxine Blair at Texarkana, Texas, on May 30 1915 and brought up   by an aunt in Chicago. After studying dance at the Sammy Dyer School of   Theatre, and modelling at a John Robert Powers School, she began her career   as an actress, becoming a member of the first black theatre group to perform   at the Chicago Theatre. “I always got in places where blacks were not   supposed to get,” she recalled. “I never saw prejudice, I just saw human   beings. I knew if you had class, style and refinement that it would make you   outstanding around the world.”

In 1948 she moved to Detroit where, in 1951, she opened the Maxine Powell   Finishing and Modeling School, the city’s first black school of its type. As   well as running her school she became the chief negotiator for a civic group   devoted to desegregating the city.

In 1969 Motown began moving its operations to Los Angeles, and Maxine Powell   left the company; but she continued to teach at various institutions around   Detroit until recently.

Maxine Powell’s commitment to her protégés continued long after she left   Motown, and she had a keen eye for backsliders. Many years after   transforming Marvin Gaye (who, she recalled, had slouched grumpily into his   first class wearing some sort of white rag on his head) from rough diamond   into suave crooner, she attended a Gaye concert in Detroit where she noted   with dismay that the singer had gained weight. “Marvin was fat!” she   exclaimed. “Much too fat to be dancing!” After the concert she told him to   let his two skinny male dancers do the moving around until he had lost the   flab.

The only star who never needed her advice was Stevie Wonder who, as she   recalled, “was always beautiful”.